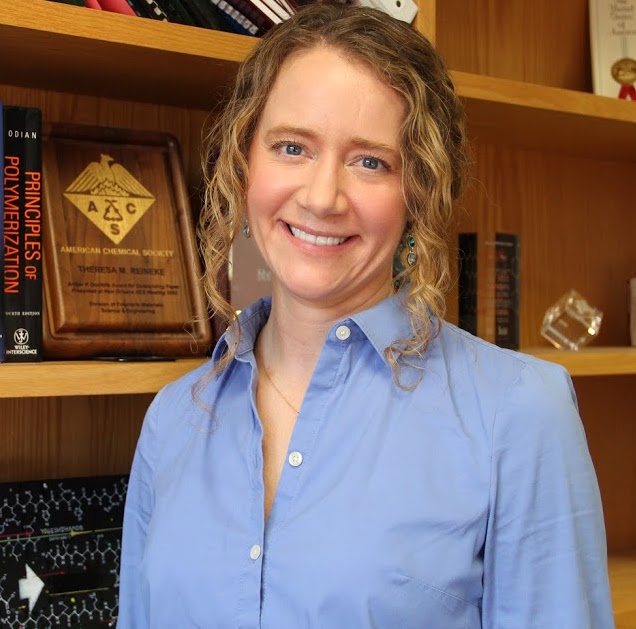 Theresa M. Reineke, Ph.D. is the Lloyd H. Reyerson Professor of Chemistry at The University of Minnesota and holds graduate faculty appointments in the Departments of Chemical Engineering/Materials Science and Pharmaceutics. Her research group is focused on enabling fundamental and applied technology advancements in three main areas: 1) the design of polymer-based delivery systems for DNA and RNA to treat genetic diseases, 2) the development of polymer-based delivery systems for enhancing oral delivery of important drugs, and 3) the creation of sustainable and environmentally friendly polymers/plastics from naturally occurring chemicals derived from plants. At UMN, Professor Reineke is the Director of a MN Innovation Partnership with Dow Chemical Company and leads the Polymer Interdisciplinary Research Group of the UMN Materials Research Science and Engineering Center. Professor Reineke also serves as Publicity Chair for the American Chemical Society Polymer Chemistry (POLY) Division and is the founding faculty advisor of the UMN Student Chapter of the ACS POLY/PMSE Division. She is currently on the Editorial Advisory Boards of the ACS journals Biomacromolecules and Bioconjugate Chemistry, and is a founding Associate Editor of ACS MacroLetters. The work of the Reineke Group is the founding technology of Techulon, Inc. a startup biotechnology firm.